In 2020, the COVID-19 pandemic upended nearly every aspect of everyday life. And while months of social distancing and staying inside may have felt like an overwhelming strain on mental health, there’s been one potential bright side: A majority of Americans changed their spending patterns during quarantine – for the better.

With less opportunity for spending money on travel or dining out, buying habits shifted to eating in, making coffee at home, and staying healthy during the pandemic. In 2020, many Americans were able to invest more, while saving on typically high costs, including child care and entertainment.

But some people still feel shame about the way they’re able to spend (or save) money, which can make it difficult to instill positive habits or make progressive budget changes. To understand how people experience financial shaming and the impact it can have, we surveyed over 1,000 people about criticisms of their finances or their financial decisions. Read on as we explore the kinds of financial shame people face; where that criticism comes from; how women and men are criticized differently; and how it affects their budget confidence.

In most cases, getting advice on your finances typically comes in the form of things you could be doing better. Instead of coming from a place of empathy or understanding, financial “advice” usually shames people for the decisions they’ve made, the money they’ve spent, and why they haven’t started saving for retirement yet. Unfortunately, 70% of people who experienced criticism for their financial decisions stopped talking about the issues to avoid experiencing more shame, even though they felt compelled to make positive changes.

When asked about the most common financial criticism they received, people we polled identified not saving enough money (42%), not planning for the future (33%), spending too much on personal items (31%), and splurging or indulging too much (30%). Not only is not saving enough money the most common criticism people faced, but it was also deemed the most insensitive and inappropriate.

Parents were the most regular source of financial criticism (47%), followed by friends (39%), significant others (31%), other family members (26%), and siblings (24%). Nearly 1 in 3 people who said they felt shame about their finances had yet to seek help or advice on improving their habits.

The Different Types of Financial Shame 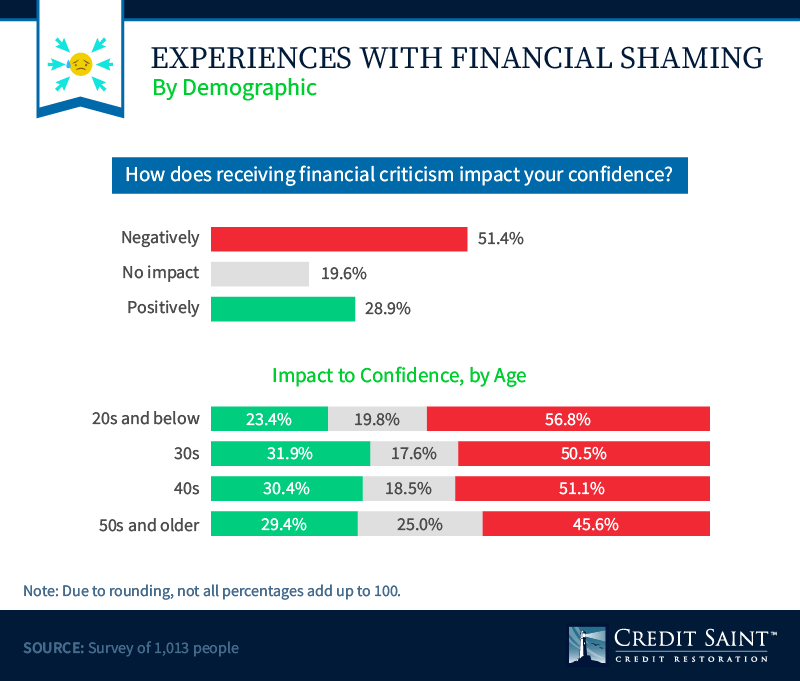 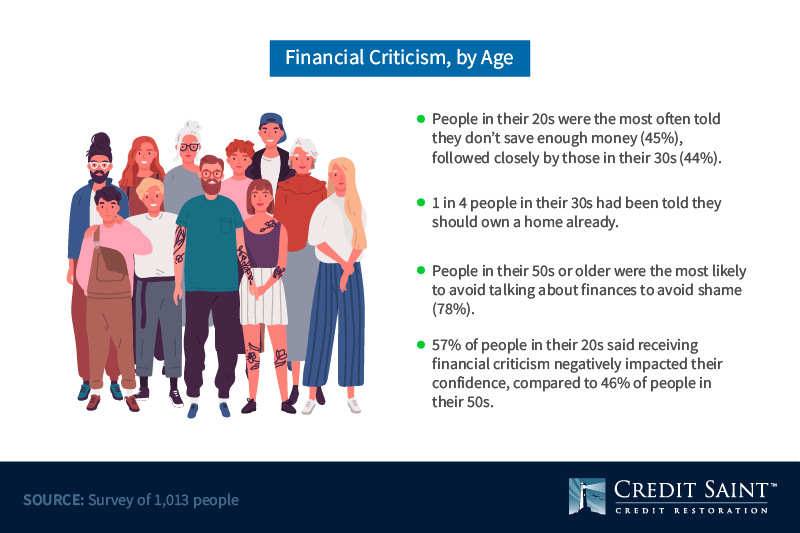 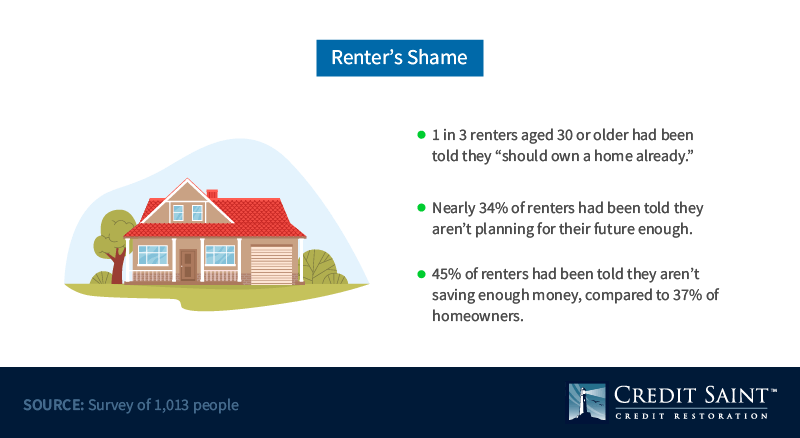 People with children and those without were also judged differently on their financial decisions. More than a quarter of people without kids had been told they live above their means, and nearly half (46%) had heard they aren’t saving enough, compared to people with kids who’d been told the same (38%). Parents seemed to avoid the topic of finances the most. As one of our parents in our surveys put it, their “money shame” was equated to “financially failing at parenthood. 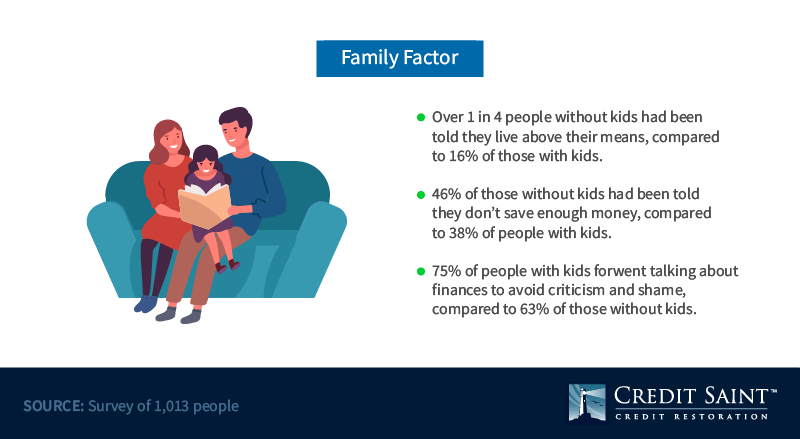 Women surveyed reported being criticized for their finances more often than men, except on the topic of homeownership and personal expenses. Twenty-three percent of women reported being told they live above their means, compared to 17% of men, and 76% of women said they try not to talk about finances to avoid potential shaming, compared to 64% of men.

When we asked our respondents to describe how this financial criticism made them feel, emotions ranged from determination to fix their financial situation to more demoralized feelings:

“It makes me feel really angry. Most of the criticisms I receive assume I've been partying and living beyond my means. My husband became disabled, I lost my job while taking care of him, and we spent our retirement funds on medical bills.” Woman, age 54.

“I agree when people criticize me for my financial wastefulness because it's so blatantly obvious. I started viewing the criticism more positively, recently, and have begun to make changes.” Man, age 36

“My parent indicated I was a “deadbeat” because I’m trying to get into the career field that I had graduated in. Their critiques make me less motivated to work on my income…” Woman, age 28

“The criticism makes me determined to do better” Man, age 65

The Right Way to Offer Advice

With so many financial criticisms coming from friends, family, and other loved ones, there has to be a way to share insights and guidance without making others feel shamed for their spending habits or lack of savings. A vast majority of people (72%) blamed themselves for their financial problems, which means they may be open to suggestions on how they can improve their habits. 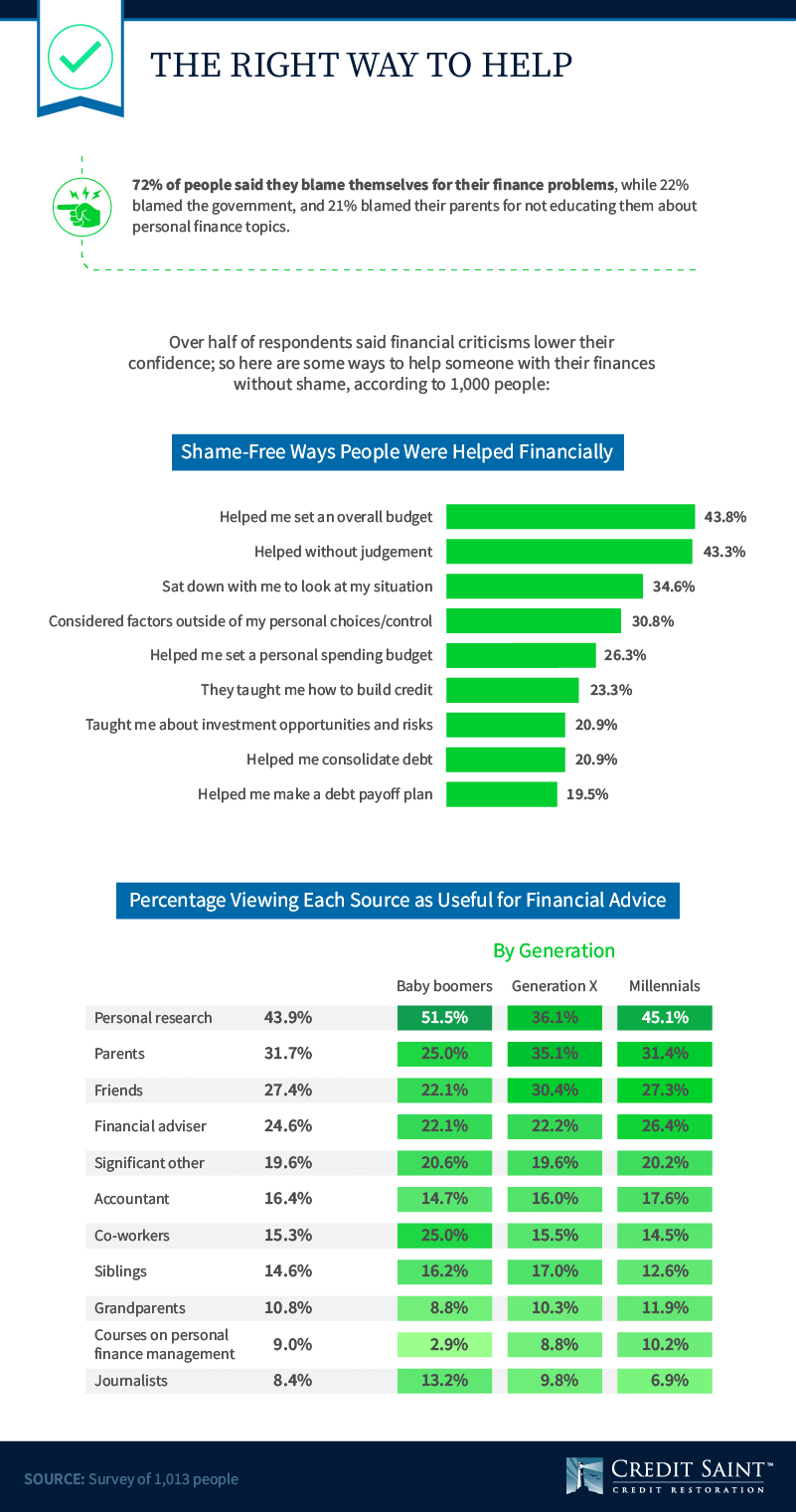 The most helpful solutions, free of shame, according to respondents included having help to set a budget (44%), being free from judgment (43%), someone taking time to sit down and evaluate their finances (35%), and assistance that considered factors outside of personal spending that might be impacting their budgets (31%).

Even more than looking to others for guidance, 44% of people polled said doing their own research was the most useful way of getting financial advice. Another 32% said they relied on their parents for guidance, followed by friends (27%) and financial advisers (25%). Just 16% of people said they found using an accountant useful. Baby boomers (52%) and millennials (45%) were the most likely to find value in their own research, while Gen X respondents were the most likely to say their parents offered useful financial advice.

Finding the Help You Need

Financial concerns can be deeply intimate, and, for some, embarrassing and difficult to discuss. When our parents, family members, and friends try to offer critiques of our spending habits or budgets, they may mean well, but ultimately, people surveyed said the most useful resource was their own financial research.

Credit Saint is the best-ranked service for helping you understand and challenge inaccurate credit data. With a private dashboard featuring full analysis and progress reports, Credit Saint will help you see the full impact of your credit score. By providing research and solutions on how you can continue to generate new positive credit history, we’ll help you take control of your credit score in ways you never thought possible. Learn more online at CreditSaint.com today.

We surveyed 1,013 people on their experiences with being criticized over the state of their finances or financial decisions. 53% of our respondents were male, and 47% were female. Respondents ranged in age from 18 to 76, and the average age was 38. 49% of respondents had kids living at home, 8% had kids living away from home, and 43% of respondents had no children. 49% of respondents owned their home, and 44% rented, while around 7% listed another, nonspecific type of living arrangement. Around 10% of our respondents were baby boomers, 26% were Generation X, and 58% were millennials. Other generations, such as Gen Z, were excluded from generational analysis due to insufficient sample size. Margin of error for this study is +/- 3% but was higher for baby boomers due to sample size.

Survey data has certain limitations related to self-reporting. These limitations include telescoping, exaggeration, and selective memory. We didn’t weight our data or statistically test our hypotheses. This study explored the experiences of financial shaming among a general sample of Americans.

Sharing tips on ways to help people with money is a nice thing to do, but please share our study for noncommercial purposes only. Don’t forget to link back to this study in order to provide credit for our work.